By Melissa Chua
I’ll never forget getting the call that our request for an emergency stay of Alma’s removal was denied. To make matters worse, ICE transferred her to a facility in Louisiana as the first step in removing her to Guatemala.

I was frantic—here was a pregnant mother being mistreated and now she was going to be permanently separated from her two young U.S.citizen children. As a mother myself, my heart ached.

It Was a Dream

One night while tossing and turning, I dreamt about arguing the first amendment for this case. And that’s what we did: We argued that while in detention, Alma advocated for her health and that of her unborn child and, in retaliation, was placed into immediate deportation. We also argued that Alma was denied due process of law because she had never had a chance to seek the immigration relief that we believe she was entitled to.

The scene at NYLAG was hectic—a team of us (lawyers, paralegals, and co-counsel) worked hard to stop the deportation. We jumped into action and filed an emergency request in federal court to prevent ICE from deporting Alma to Guatemala. The Court granted a temporary restraining order to allow further immigration proceedings.

Alma was finally free to go home and see her children and loved ones! 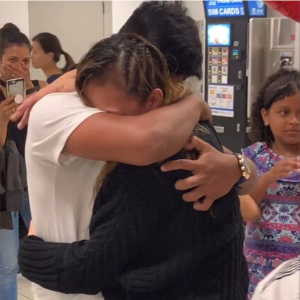 NYLAG was there when Alma landed in NYC. Her young daughter spotted her first and ran up the stairs in lighting speed to hug her mother. They cried. We all cried. A family reunited! And I won’t forget when her adult nephew, who Alma helped raise, embraced her. She fell into his arms, and they just wept.

I am beyond glad that Alma will spend the holidays reunited with her family and have her day in court. NYLAG stands for the rights of all, regardless of immigration status. Last year, we handled 18,500+ immigration cases—from asylum claims to deportation defense— affecting 36,000+ people, including mothers like Alma.

Keep Families Together. All Donations Matched!