On July 12, President Donald Trump stood on the White House lawn and confidently told reporters that Immigration and Customs Enforcement would begin raids targeting roughly 2,000 immigrants over the following few days. On July 15, after advocates reported a mere handful of arrests, Trump stuck to his blustery message that the operation had been “very successful,” adding that “many, many were taken out on Sunday, you just didn’t know about it.”

Yet on Monday, Department of Homeland Security officials told the New York Times that just 35 people had been detained. The low number shows Trump was more focused on terrorizing immigrants than making large-scale arrests, according to immigration lawyers.

“The goal was really to strike fear into the hearts of these communities,” said Laura Lynch, senior policy counsel at the American Immigration Lawyers Association. “It’s clear this administration is using immigrants as a political tool without any regard for their humanity or due process.”

In announcing the raids so publicly, the president also sabotaged his own operation.

The acting director of ICE, Matthew Albence, acknowledged that the raids were not a success. “I don’t know of any other population where people are telling them how to avoid arrest as a result of illegal activity,” he said in an interview with The New York Times. “It certainly makes it harder for us to effectuate these orders issued.”

While immigration enforcement actions happen on a daily basis in neighborhoods throughout the U.S. ― there have been at least 900 arrests over the past few months, according to DHS ― the operation Trump has been promoting specifically targeted families with final deportation orders rather than those with criminal backgrounds. A group of legal aid nonprofits immediately filed a lawsuit to protect refugees from being arrested, claiming that in many cases the targeted immigrants didn’t show up to court dates because of bureaucratic errors that meant people had no idea where their hearings were being held.

But Trump successfully spread fear throughout immigrant communities. Since the president first mentioned the looming arrests on Twitter in late June, undocumented families have been on edge. In the days leading up to the expected raids, many immigrants stayed inside their homes, missing work and keeping their kids from school to avoid being arrested.

“We’ve been getting calls from people having panic attacks,” Elizabeth Gibson, a senior attorney at the New York Legal Assistance Group, told HuffPost before the raids had begun. “Asylum clients are saying they’d rather die than go back to their country.”

By publicizing the arrests so far in advance, Trump scared families and riled up his anti-immigrant base. But he also impeded ICE’s ability to make arrests. Despite the fact that immigration experts have said arresting thousands of immigrants over the course of the weekend was logistically impossible due to a lack of resources, Trump’s announcement made sure people were prepared when officers came to their doors.

Immigrant rights advocates, lawyers and families had so much advance warning that they were able to spread information about legal rights, share reports of ICE activity in their neighborhood, and have legal aid ready for anyone who needed it. Immigrants knew that they didn’t need to let ICE inside their homes, and that the officers were required to show them a warrant signed by a judge. Lawyers told HuffPost about teenagers who refused to open the door when ICE knocked, and neighbors of targets who told officers to get lost when they showed up at their buildings.

While the mass arrests Trump promised never happened, Lynch said that large-scale raids could happen in the future and that immigrants should stay vigilant.

And the rollout of anti-immigrant policies continued this week, with the administration announcing a plan to rapidly deport more immigrants without giving them court hearings, and a rule that would stop anyone who traveled through a third country en route to the U.S. from seeking asylum.

“When we look at the policies introduced in rapid succession by this administration it’s clear that the message being sent is that immigrants aren’t welcome here,” said Lynch. “That is deeply disturbing.”

Originally published in HuffPost on July 23, 2019.

NYLAG’s Abby Biberman spoke with the Times Union about the recent spike in demand for food and cash assistance for low-income residents in New York. “Anecdotally, our clients are experiencing a lot of problems with their benefits lately,” Biberman said. “We’ve seen a lot of delays.”

Many Russian émigrés lost access to Russian pensions after the invasion of Ukraine and have petitioned the Social Security Administration to increase monthly payments to offset the loss. NYLAG’s Michelle Spadafore spoke with GBH News about the issue. 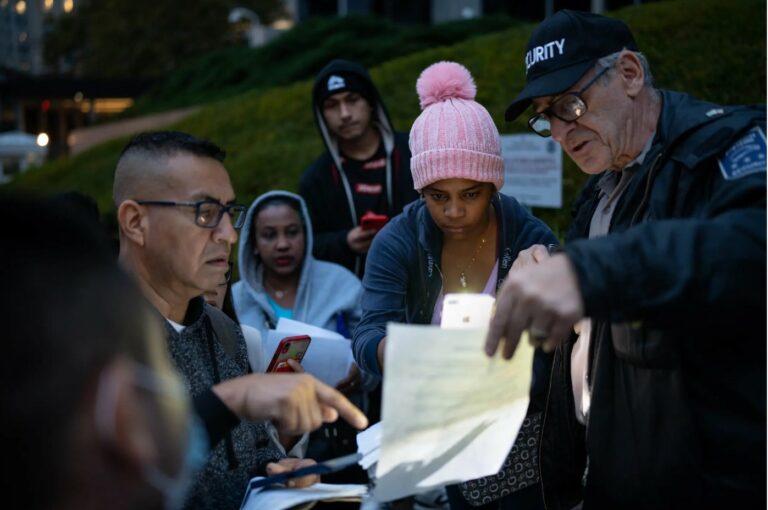