Nearly 25 years after a nationwide chain of beauty and secretarial schools was closed for defrauding students, the Department of Education has agreed to help victims wipe clean their burdensome federal student loan debts.

More than 36,000 students — mostly low-income, immigrant women — who attended schools run by Wilfred American Educational Corporation could potentially be affected by the settlement, which was approved by a federal court judge on Tuesday.

“The department has been collecting on these loans for decades, including by garnishing wages and intercepting income tax refunds,” said Jane Greengold Stevens, the director of litigation at New York Legal Assistance Group, a nonprofit representing the former students. “Finally, by entering this settlement, the department is providing the students an opportunity to get out from under the burden of these loans.”

The case underscores how long the federal government has been wrestling with the issue of corrupt for-profit vocational schools that deceive vulnerable and poor students about the costs of training programs and the prospect of landing jobs. Even as this decades-old case is being resolved, Education Department officials, attorneys general, lawmakers, advocates and former students are battling over more recent cases involving the erasure of billions of additional dollars in federally guaranteed loans that were taken out by students who were defrauded.

“We hope the lawsuit, and the settlement, will encourage the department to take steps in the future to prevent for-profit schools from engaging in fraudulent activity, to keep borrowers from becoming victims in the first place,” Ms. Greengold Stevens said.

The last of Wilfred Academy’s for-profit beauty and vocational schools was shuttered in 1994 after federal investigations into crimes that included financial aid fraud, false certification, racketeering, wire fraud and embezzlement. The company’s president and other employees were convicted of fraud.

Though thousands of students who took out federal loans from 1986 to 1994 to attend Wilfred are eligible for loan forgiveness, only about 100 applied through the New York Legal Assistance Group.

Evelyn Rivera, 48, was one of them. Two weeks after she took out a $2,000 loan to attend classes in the early 1990s, the Wilfred office she was going to attend was closed and abandoned. “They just took the money and ran,” said Ms. Rivera, who lives in a women’s shelter in Long Island City, Queens. “And 20 years later, I get a call stating that I owe $45,000.” Her credit score has hurt her chances of getting a job, she said.

Referring to a tattoo on her chest of a spider dangling from a web by a thread, she said: “That was me.” 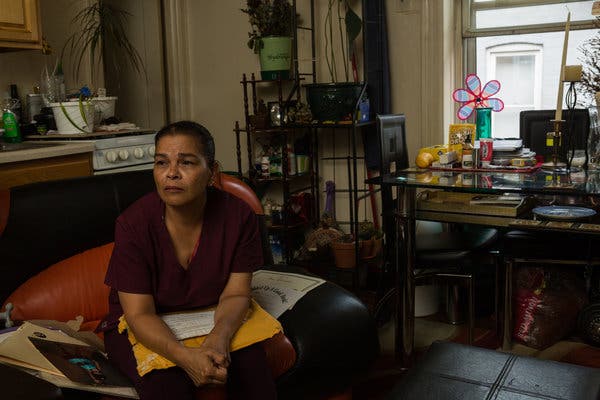 Now, Ms. Rivera has a letter from the Education Department stating that her debt has been eliminated and her previous repayments — totaling $2,000 to $3,000, according to the legal assistance group — would be refunded.

Most eligible students who are defrauded by schools are unaware that their loans can be canceled, and the department has not necessarily told them. But in this case, as a result of the settlement, the department will notify students by mail in English and Spanish and suspend loan collection while they file applications to discharge their loans.

The Wilfred students are getting their loans canceled under a federal law that allows borrowers to apply for loan forgiveness if the schools they attended falsely certified them as eligible for loans. Congress passed the statute in 1992 after a Senate panel concluded that “a virtually complete breakdown in effective regulation and oversight had opened the door for fraud, abuse, and other serious problems at every level.”

The discharge system was overwhelmed by applicants after a wave of for-profit failures that included Corinthian Colleges (which closed in 2015) and ITT Technical Institute (closed in 2016). The Obama administration, which initiated a crackdown against abuses by predatory for-profit colleges, revised and enlarged what is known as the borrower-defense process, but the new rules, scheduled to take effect July 1, were delayed by the Trump administration’s education secretary, Betsy DeVos.

The rules, Ms. DeVos said when she postponed their being carried out, resulted in a “muddled process that’s unfair to students and schools, and puts taxpayers on the hook for significant costs.” The for-profit college industry has blasted the new borrower-defense regulations, arguing that they could lead to financial ruin.

Democratic attorneys general in 18 states filed a lawsuit last month against the agency challenging the decision. They and other critics have accused Ms. DeVos of shelving the Obama administration’s campaign against fraudulent practices in the industry.

The former beauty school students whom Wilfred falsely certified years ago as being eligible for a federally guaranteed student loan will avoid that debate.

Daisy Rodriguez, 53, recalled hearing about Wilfred Academy from a television advertisement in 1987. Like many other former students, she has a manila folder of certificates from Wilfred and a graduation photograph of her in a long white dress with fake white fur trim, pearls and a red carnation pinned to her chest. When Ms. Rodriguez returned to Wilfred for promised job placement assistance, she said she was told, “We don’t do that anymore.”

For almost two decades, she said, she was haunted by early-morning phone calls and letters from debt collectors. “They used to harass me,” Ms. Rodriguez said. “I used to cry. I lost a lot of weight. I was depressed.”

Last month, she received her loan discharge and a check for the $12,000 that she had repaid over the years.

Originally published in The New York Times on August 9, 2017